David Friedman is considered to be one of the most influential vibraphonists in the history of the instrument. Internationally renowned as a vibraphonist, marimbist, composer and jazz educator, he has his own musical message, born of fascinatingly diverse musical influences.

Having worked with such varied musical personalities as Leonard Bernstein, Luciano Berio, Bobby McFerrin, Wayne Shorter and Yoko Ono, few jazz musicians can claim as broad a spectrum of performing and recording experience.

The list doesn`t stop there. Friedman has been heard either live or on recordings with, among others, Joe Henderson, Horace Silver, Johnny Griffin, Hubert Laws, Jane Ira Bloom, Ron Carter and John Scofield. Friedman’s vibraphone and compositions are both featured on Chet Baker’s award winning Enja release Peace, with bassist Buster Williams and drummer Joe Chambers.

A dedicated and renowned educator, David Friedman founded the jazz program at Berlin’s University of the Arts, and served as its head for sixteen years. He continues to perform masterclasses throughout Europe, North America and Japan. His book, Vibraphone Technique, Dampening and Pedaling, is considered to be the Bible of mallet instruction books.

In 1977, Friedman co-founded the unique vibe-marimba quartet Double Image, with Dave Samuels. Their first recording, Double Image, was nominated for a German “Grammy”, and has just been re-released as a special edition by Enja Records. Friedman’s Enja release Shades of Change, with pianist Geri Allen, bassist Anthony Cox and drummer Ronnie Burrage, was voted by Downbeat magazine as “One of the year’s best 20 CD’s”. 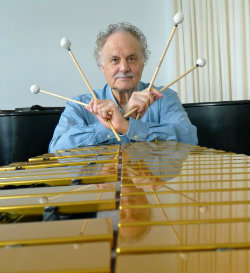